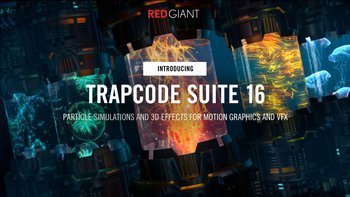 Emit from Parent (NEW)
The limited Aux particle system is a thing of the past. Particular’s new ‘Emit From Parent
System’ makes it possible to have emitters that emit complete Emitters. You can easily set up
emitter chains, or have multiple systems emit from one source. Combine presets to create
embers and smoke from flame particles. Fireworks can reach a whole new explosive depth.

Even More Particle Systems (NEW)
Work with up to 16 particle systems in the same 3D space (previously 8) and explore endless
creative possibilities. Create beautiful, complex effects through the interaction of different
systems, all within one instance of Particular. Emitters in Multi-system setups can share
parameter settings (such as turbulence, gravity and more), and can be saved as a single preset.

Physics: Air & Bounce Together (NEW)
For the first time ever, combine air and bounce physics for the most realistic, complex effects
ever offered in Particular. Choose up to 3 bounce layers with full bounce control and interaction.

Physics: Environment (NEW)
The Environment category houses external forces like Gravity, Air Turbulence and the new
Wind effect - a force that is now responsive to the mass, size, and air resistance of particles.
Define different aspects of the Air Turbulence around your system to affect particle Position and
Orientation/Spin.

Physics: Particle Properties (NEW)
Particular now includes more intuitive control of how particles respond to their environment by
making Mass and Air Resistance properties of the particles themselves.

Fast Physics (NEW)
A new Fast Physics section includes the tools that can affect physics quickly without much of a
hit to render times, such as Turbulence Field and Spherical Fields. New Drift controls push
particles directly when real-world physics aren’t needed. A new Affect Opacity option is now
available with Turbulence Field.

Behaviors: Flocking/Swarming (NEW)
Particular’s powerful new Flocking simulation tools include automatic behaviors that take
particle animation to a new level. Use Attract and Separate tools to define how much the
particles want to be near each other. The Align tool lets you control how much particles flock in
the same direction.

Behaviors: Predator/Prey (NEW)
Set up Predator/Prey relationships between particle systems. When a system is set up as Prey,
you can use the Evade parameter to control how much they want to avoid a Predator. If a
system is set as a Predator, the Pursue control decides how hungry it is. Control the maximum
speed of your particles, how far they can see each other, and their field of view for even more
realistic and varied behavior.

Behaviors: Meander (NEW)
The new Meander behavior allows individual particles to wander about like people in a shopping
mall or to have variances in speed like cars in different lanes of traffic. Meander’s influence over
your animation is affected by the Mass of particles and can be used to add some nice individual
movement to each particle. Meander can also be used to create complex group motion when
combined with other features and behaviors, such as Flocking.

Velocity Over Life (NEW)
For the first time ever, particles can be set to change their speed several times during a
simulation using a Velocity Over Life curve. Start particles off slow so they stick to their emission
point before speeding away, or have them start off fast, slow down and speed up again over the
course of their lifetime. Great for use with Text and 3D Object-based emitters.

430 PLUS PRESETS (NEW)
Hit the ground running with over 430 fully-customizable Designer presets. Particular 4 includes
over 80 new presets that show off powerful features like fluid dynamics, behaviors and more.
Explore the library to find beautifully designed effects for creating fluids, text, fire, spaceflight,
fireworks, muzzle flashes, explosions, smoke and more. Save your own presets, and share
them across your facility.

Sprites
Use any image in your composition as a particle by assigning it to a 3D sprite. Particular 5 now
includes over 260 still and animated sprite images, easily loaded directly within After Effects or
in the Designer via the Sprite Loading Panel. In the latest version of Particular, we’ve simplified
the sprite workflow to make it easier to work with than ever before.

Updated UI (NEW)
We’ve been cleaning house to make Particular easier to work with. We’ve renamed blocks,
reorganized some confusing areas, and made the workflow easier in tons of little ways that add
up to a much better, cleaner experience.
Cinema 4D File Import (NEW)
Thanks to Cineware, use .c4d file 3D geometry as emitters. Supported Geometry properties
include: animation and transformations (rotation, position/translation and scaling).